To my knowledge apart from us there where only 2 other people actively marketing worms and worm farms in South Africa. One in the Western Cape that worked with imported worm bins and one in KZN who produced their own brand of worm composters.

Since then things have changed dramatically. In 1998 we sourced some locally produced bins and converted them into wormeries.

The Tower system was introduced with the Mini Tower worm farm  and the Midi Tower worm farm as the first models to hit the market. The Midi tower a 3 tier worm farm made out of recycled plastic bins, a tap for leachate and worm tea and a lid has been copied and renamed by numerous businesses all over the country and has become probably the most successful locally produced worm farm in South Africa. Go to our products page and have a look at the original and our other products like worms and worm castings. 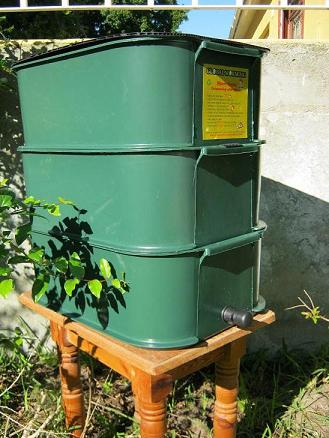 The Mini Tower worm farm has a volume of 85 liters. It is one of the most popular worm farms in South Africa and is usually perfect for an average 2 person household.

Go to our order page and

range of Worm farms and prices

Each worm bin we offer will be supplied with

Running a worm farm is not rocket science but it is good to know that you can ask an experienced worm farmer for advise if the need arises!

All our products can either be collected at our workshop or will be posted or delivered to any location within South Africa.

Taking into account that households and businesses vary in size and produce different amounts of waste we added more worm bins to our range.

Today we produce a large variety of domestic- and industrial sized worm farms that can be adapted to suit our clients personal needs.

All worm farms are easy to set up and maintain and will help to convert food waste and garden cuttings into nutrient rich natural plant food.

All our products are locally produced, adaptable to your personal needs,very competitively priced and still amongst the best worm farms in South Africa.

Recycling with earthworms is easy, fun, can even generate an income, helps in the fight against climate change and has many other benefits.

If you are want to start a worm composting project for your business, guesthouse, hotel, farm, smallholding, corporate kitchen, restaurant or your municipal landfill but don't know where to start? We can help you! We can assist you with an individual worm composting plan tailored to your personal needs. Consulting fees start from as little as R 300! Call us and draw from our experience of more than a decade in the field of worm farming!

Return to the home page

To learn more about worm composting type your keyword for example (earthworm) into the search box below!