Angling is a wonderful hobby and catching carp with earthworms is a method that millions of keen fishermen have used again and again all over the world.

Sure there is lots of other fish bait that can be found in tackle boxes but the trusted earthworm should be part of every fishing enthusiasts arsenal when he / she is out at the lake or dam to try his/her luck.

Just to cover my back I refer to fishing enthusiasts in the male form mainly because it seems to be still a hobby that is loved and appreciated predominately by men.

Maybe it still has something to do with those hunter genes in us :-)!

Back to the topic of catching carp with earthworms .

As I mentioned above I've seen tackle boxes filled with the most amazing baits and mixed magic portions and I am convinced that for the very serious fishermen it is a must to be equipped  for every eventuality.

But the novice or hobby anglers like myself don't need to go to this extent to enjoy a day out and have a good chance of landing a few carp. 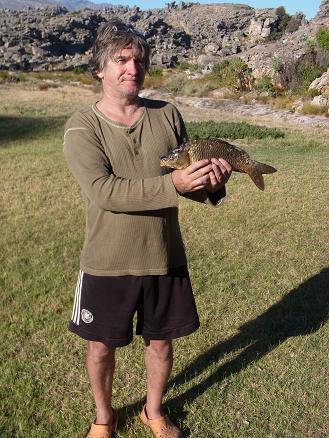 This carp I caught recently in a dam located in the Groot Winterhoek mountains about 1.5 hours drive from Cape Town, South Africa.

Yes I know this fish doesn't really look that big and for a moment I considered enlarging the photo to make it look a bit more impressive :-) !

Nevertheless big or small it was still nice enough for a trophy picture.

I have been catching carp with earthworms now for more than 15 years and although I use a few other baits and ingredients as well, I never go carp fishing without a sufficient supply of earth worms.

To be specific I use red worms as well known as red wigglers, compost worms and under their scientific name Eisenia fetida (the old writing style was Eisenia foetida).

In addition to earthworms I normally have some sweet corn kernels, some crisp toasted bread, slices of fresh brown bread, some floats, some vanilla essence (used at home for baking) and a mix of a little vegetable oil, water and mild curry powder in my tackle box.

Apart from my gear that's all I need to be successful when I go out carp fishing.

Many fishermen swear that the best catches are made in the evening or early morning but one can catch fish even in brought daylight.

When you go to fish for carp it is a good idea to get some information about the average sizes of fish you might encounter in the lake or dam you are going to fish in.

This means the fishing gear and tackle should be chosen to suit the expected sizes of fish you hope to pull out of the water.

For freshwater- or inshore fishing use a basic spinning- or casting rod that can handle fish up to a weight of 20kg / 44lb.

Choose a fishing line with a breaking point that's below 10kg. This way you might miss out on landing a 30kg monster carp which is still possible if you got the skill, but you will be able to catch many smaller carp.

And most carp are much smaller than the occasional giants you might encounter.

Remember the thinner the line the less likely the fish is going to notice it! 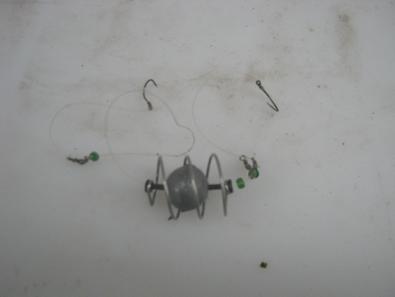 When you want to go catching carp with earthworms one of these carp rigs always comes in handy.

Get a few of those special carp rigs, similar to the one you'll see in the pic above. They usually have 2 small hooks sized 10 or 12 attached to a wire spiral that looks a little bit like a spring.

Once you are on your fishing spot set up your mobile chair and your rod stand. Ideally your rod should not stand vertically as it might cast a shadow onto the water or might be noticed by the fish as a new feature on the shore.

Make no mistake fish are often  cautious and you reduce your chances of success if you make the fish to aware of your presence at the lake.

They hear very well and notice your steps, chat or music next to the waters edge.

When you are catching carp with earthworms the chances to land a fish are definitely larger if you create a quiet relaxed environment on the shore. 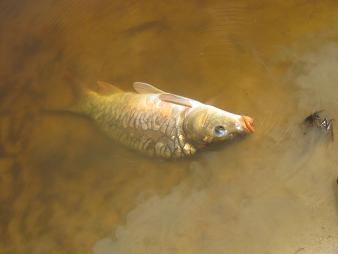 A mirror carp caught with a carp rig that you can see on the right side of the picture.

When you have your carp rig on the swivel take a slice of the fresh bread you brought and curl it around the wire mesh. Squeeze it tight so it will stick nicely to the mesh.

Next place a float on each of the hooks. Push it through the bottom bow of the hook to create some space for the earthworm.

Pick a nicely sized worm and hook the upper part of its body twice.

The point of the hook should be disguised by the worms body  and stand out only a tiny bit.

The unhooked part of the worm should wiggle freely. This movement will later attract the fish as well as the scent of the live bait in the water.

Place a worm on the other hook as well. Now dip the wire mesh with the bread into your prepared curry mix and cast your bait into the water.

Try to get it to land at least 20 meter / 22 yards away from your position.

Place the rod into your rod stand, make sure that the line is tight without you dragging it. Now set the resistance setting of your reel to its lowest possible position, sit down and quietly wait.

Once the bait has been cast it should stay there undisturbed for up to 30 minutes before you reel it in and prepare for your next cast.

When a carp finds the fish bait and grabs one of the worms, it will immediately move away. Now don't jerk on the line straight away. Give it a second or 2 and then grab the line and slowly lift the tip of your rod up. This will set the hook.

Now you just have to increase the resistance setting of

your reel and start reeling your fish in. The stronger the fish the longer you will have to play with it to avoid it breaking the line.

Consider the practice of catch and release!

Good luck and enjoy catching carp with earthworms. Please send us pictures of your success for publishing.

Return from catching carp with earthworms to the home page.

Learn how to raise your own earthworms for fish bait.

Go from catching carp with earthworms to the page benefits of worm composting.