What is Worm Farming? -
An overview about the history and the basics of recycling with earthworms!

Worm farming, worm composting, vermiculture and vermicomposting are all different names for the process of recycling organic matter with the help of earthworms.

It is a neat and brilliant solution to reduce the pressure on landfill sites.

Earthworms have most likely been toiling the surface of the earth since the beginning of times!

The first nation that recognized the importance of earthworms for the fertility and conditioning of the soil were the Greeks.

The Egyptian Queen Cleopatra the 7th (69 BC. - 30 BC) known by most for her connections to the Roman's Marc-Antony and Caesar knew that worms played a big role to the banks of the the River Nile fertile.

During her reign as the last Pharaoh of Egypt she passed a law that prohibited the removal of earthworms from Egypt. 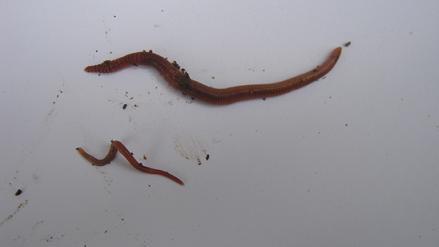 The English scientist Charles Darwin (1809 – April 1882) world renown for his publication of “On the Origin of Species” which advocates the theory of evolution, showed as well great interest in earthworms and studied them profoundly.

He published his findings in his book

“THE FORMATION OF VEGETABLE MOULD,
THROUGH THE ACTION OF WORMS WITH OBSERVATIONS ON THEIR HABITS".

The 20th century brought a boost in popularity for worm composting

Worm composting as we know it today became only popular in the 20th century.

Only a few of the 3000 kinds of earthworms that live on our planet are ideal to be used in worm farms, may it be domestic bins or bulk beds that can host millions of juicy compost worms.

Worm composting has lots of benefits for all involved in the process!

The most popular worms are the European Night crawlers (Eisenia Hortensis) and Red Wigglers or Red worms (Eisenia Foetida or Eisenia Fetida).

How does the worm composting process work?

Worms are placed in a worm bin and are fed with organic matter.

Worm food usually consists of kitchen scraps or garden waste but can basically be anything that has ever been alive and is now dead.  Wet waste is added to worm bins and the compost worms will eagerly eat the organic matter as it starts to decompose. They consume up to half their body weight of food per day.

While they digest it they richly enhance its fertility values, improve its water holding consistency and deposit their droppings known as "worm castings" usually close to the surface of their living space.

Worm composting is quicker and less labor intensive than the traditional composting process and produces fantastic organic fertilizers. Vermiculture can be done nearly anywhere. You can set up small worm bins under kitchen sinks or in store rooms of apartment dwellers. Bigger domestic bins serve small and large

Worm composting is still a niche market and has huge growth potential for many years to come.

How to build a homemade worm farm

In Your Book "How to start a profitable worm business..." What Did You Mean By...

Hi Stephan, I bought your book. Absolutely love it! I've read it 3 times and carry it with me in my purse when I have to wait. ;0). You talked about …

Why does a worm bin need a tap

Hello Stephan, someone asked me 1) what the tap is for on the worm bin ? 2) where do you explain what the worm bin parts are for and how to start …

Where can I get plans to build a worm farm to cope with 500kg food waste per month?

Horse/rabbit manure in worm bins Not rated yet
Hello, I enjoyed reading your book and found lots of useful information but have a couple of questions about bedding and food. Does the bedding need …