Fruit flies in the worm farm.

Fruit flies are attracted to fruit and as such can often be found in worm farms, compost heaps and worm bins.

Although they are essentially not harmful to the worms they can become a nuisance if they are allowed to multiply.

They can be identified by plump bodies that are usually pale brown or orange and a slow flight. They are between 1 to 2 mm / 64th to 32nd of an inch big.

Mature flies lay their eggs on the peels of fruit, especially bananas. Those eggs are to small to be recognized by the human eye. When the conditions are right (warm and humid) the flies hatch and can quickly multiply if the environment is to their liking.

There are a few ways to reduce or even eliminate the fruit fly population in your worm bin.

1.) Place all your fruit peels and rotting fruit that you want to add to the worm bin over night in a freezer before you put them into your worm bin. This will kill all eggs that are on the fruit and peels. 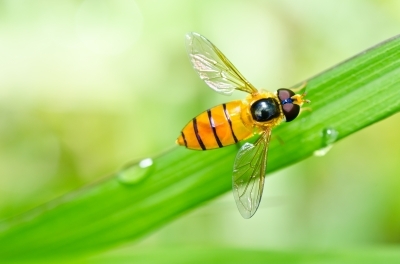 Image courtesy of SweetCrisis at FreeDigitalphotos.net

2.) Place the kitchen scraps for about 1 minute into a microwave oven to kill eggs that might be on the fruit and peels.

3.) When you want to add fruit peels and fruit to your worm bin dig a trench through the center of the worm bin and dump your waste into the trench. Then cover the worm food with already processed worm castings.

The casting will act as a natural barrier against the flies. 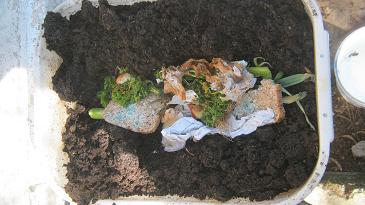 Worm food placed in a trench in a worm farm before it gets covered with worm castings.

Another way to keep those tiny invaders out of your worm farm is to catch them with a trap.

Take a large empty Soda plastic bottle, cut of the neck just above the place where the round turns into the straight line. 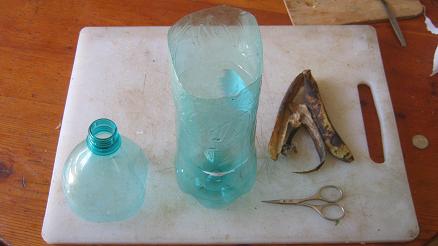 A soda bottle with cut off neck, banana skin and sharp scissors. 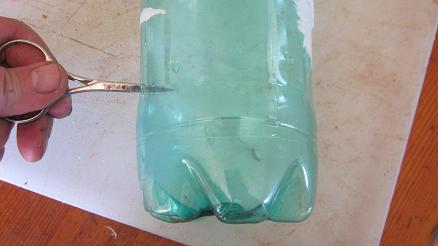 Throw a few banana skins into the empty bottle.

· Place the cut off top peace upside down into the opening at the top of the bottle base. It should look like a funnel now.

· Make sure that it fits tight and no gaps are left open.

· Attach the funnel top to the bottle base with some clear sticky tape.

· Place the trap a few meters away from the worm farm on an elevated place. 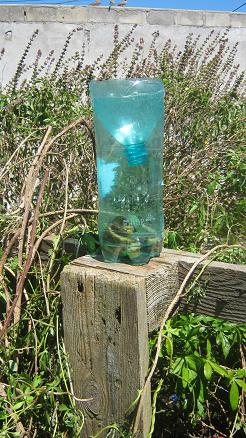 It’s that easy! You can prepare a few of them slightly modified and place them in different locations to find out which works best.

Now open the lid of the worm farm and chase out as many of the fruit flies as you can than close the worm bin again.

The flies which have an excellent sense of smell will get attracted by the banana skins to the traps and crawl into the small holes on the side or the funnel opening at the top.

Most of them will not find the way out again. You should catch most of the flies that have been inside your worm bin within 48 hours.

Once your traps are full either release them somewhere else or wait till they are dead and feed them to your worms.

If there are more flies left set up the traps again till you have caught the remaining ones.

Fungus Gnats - are as well members of the fly family and are similar in size and looks to a mosquito.

They have a black slender body which distinguishes them easily from Fruit flies.

They get attracted by fungi and moisture and can be found in and around compost heaps and worm bins.

try to reduce the moisture levels on the surface areas of your bins (be careful and remember that the worms need a moist environment to live in.) Or try to reduce the levels of food that you add to the worm farm.

We never really had a major problem with gnats and usually just ignore them.

Return to the "Home page"

Find out more about other creatures that live inside a worm farm.

For questions or suggestions please go to our "contact page"!