A proper worm farm preparation for holidays is quite a simple thing to do. Many people that are concerned that their worms might starve to death or die of other causes when they and

their loved ones go on a well deserved holiday or an extended business trip. The good news is that there is no need to worry about worms and worm farm. Compost worms are pretty hardy creatures and with just a few easy steps you can make sure that your worms will be well cared for while you are enjoying yourself away from home.

A proper worm farm preparation for holidays has to consider the basic living requirements compost worms have to survive in the limited space of a worm farm.

To feel comfortable earthworms need to live in a moist environment because they are breathing through their skin.

If their surroundings become to dry the particles of their bedding will get stuck to their moist skin and will suffocate them.

The ideal moisture level in a worm bin should be similar to that of a squeezed out sponge but if in doubt the bedding should rather be to wet than to dry.

Worms obviously need food and can eat in captivity up to half their body weight per day. But they don't have to eat that much to support themselves. 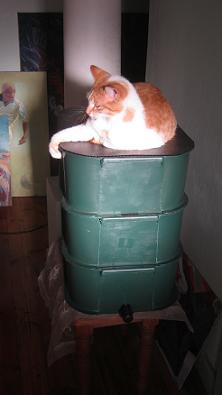 A good place for a worm farm that has to be left unattended for several weeks is cool place inside, a garage, a storeroom or outside under a tree or next to a wall in a shaded spot.

Worms can live of much less and can even go on without food for quite some time. If they have consumed all the food in their bin they will continue to gulp down the bedding and their own castings to use up every bit of nutrition that they still contain.

I have left worms in a worm farm for up to 3 month without adding food and found them to be very thin but alive. After 2 weeks of normal feeding they where back to normal.

A good worm farm preparation for holidays is to add an ample amount of kitchen scraps and dog- or rabbit manure to it.

Worms feed on material that is in the decomposing process and not on fresh fruit and vegetables. So its good to give them a variety of materials to feed which will probably decompose at a different speed and not allow the worms to polish all food of in record time.

If the worm bedding gets warmer or colder it can become life threatening for your worm herd.

It's always a good idea to keep a nice amount of finished castings and bedding in a worm farm if one suspects extreme temperatures might occur.

The bedding and castings will act as a barrier against heat and cold and the worms can crawl closer to the center of the bedding to escape life threatening temperatures.

Make sure the worm bin is properly closed to protect the worms from natural enemies like birds.

Lastly your worms will need oxygen to survive. This does not mean that they will need huge aeration holes in their worm farm.

A few small openings preferably at 2 opposing sites of your worm bin will allow sufficient air supply for your worms.

Follow the short check list below and your worm farm preparation for holidays should be done and your worms be just fine when you return from your vacation or business trip.

Enjoy your holidays and happy worming!

Return from worm farm preparation for holidays to the Home page.