Worm farm preparation for winter can be vital if you are living in an area that is frequently hit by snow and ice during the colder month of the year. Although compost worms ("Eisenia fetida" / "Eiseina foetida")

are hardy creatures and can tolerate a wide range of temperatures they have to be protected against the cold once the thermometer drops below 41 degrees Fahrenheit / 5 degrees Celsius or they will freeze to death.

In mild climate zones that never really experience temperatures below Zero degrees Celsius / 32 degrees Fahrenheit it is quite simple to keep your worms safe. Just make sure that all your worm bins contain enough bedding and food to give worms a protective barrier of at least 30cm / 12 inches from all sides against the cold temperatures.

This will give your worm herd the chance to crawl towards the center of their bedding which will act as an insulating material in case of low temperatures outside.

An additional carpet or blanket as cover over the top and sides of your worm farm will help as well and that is usually all it takes apart from your normal routine to get your worms safely through winter.

If it doesn't get too cold your worms will still be producing a fair amount of cocoons and infant worms during this time.

However if you are living in parts of the world that really can get freezing cold and your worm farm is exposed to temperatures below 5 degrees Celsius / 41 degrees Fahrenheit than you have to keep the bedding levels and food levels much higher than during summer.

Bedding material can act as an insulation agent and will allow worms to hide away from the cold.

This worm bin placed in my home is perfectly safe during winter.

If the bedding in your worm bin is too shallow a drop of temperature below freezing point could destroy your entire worm herd. So it is vital to prepare for the cold weather. 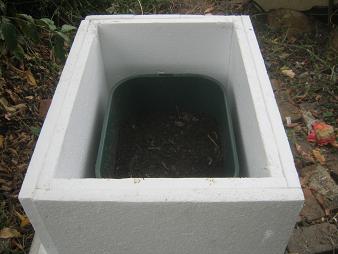 A worm farm inside a polystyrene box protected against cold temperatures.

As a worm farm preparation for winter it is advisable to move your bin into an indoor facility, a store room, the garage or any other place that can be heated up if needed. This will ensure that your worms will be safe and keep converting your kitchen scraps even during the cold winter months.

If you can not move your worm bin into your home you have to make sure that the bedding and food inside your bin will fill up the bin as much as possible. In addition cover your worm farm with as many protective blankets as you can.

Another option as worm farm preparation for winter would be to build an insulating box with a lid out of polystyrene sheets to protect your compost worms. Those sheets should be at least 2 inches thick to be have a decent impact.

No matter which of the above steps you want to take as worm farm preparation for winter, it is essential that your worm bin is prepared for the cold time of the year to prevent the loss of all your wiggling friends. All the best, stay warm yourself and happy worming :-)!

Return from worm farm preparation for winter to the home page

How to protect your worms in summer