How to protect worms from ants

us to find out if the insects are actually attacking and eating the worms and how to best get rid of the
invaders?

With about 15000 species varying in size from just 2mm / 12th of an inch to more than 2.5cm / 1 inch that can be found all over the world one can obviously not just give one simple answer to the problem.

Ants are social creatures and live in colonies ranging from just a few thousand to millions of insects. They are constantly on the search for food and once one of their spies has identified a new food source it will take only a short while for the “worker ants ” to arrive and start harvesting the food and carrying it back into their nest.

Do we have to
protect worms from ants?

Worm farms with all different kinds of organic waste products are naturally a potentially great place for ants to raid and if the conditions are right this can go on for quite a while.

Although ants are omnivorous most species specialize usually on certain kinds of foods and will not actually harm the worms. Some eat only meats and fats, other like sugary fruit, others leaf’s or seeds and many of them nourish themselves on a combination of the above.

If you don’t mind the ants taking some of the food out of your worm farm and you have more than enough worm food to keep your compost worms supplied than it might be ok to just ignore the ants and let them take their share.

Only very few species of ants are likely to attack the worms themselves. But if they do it can have devastating effects on your worm population. 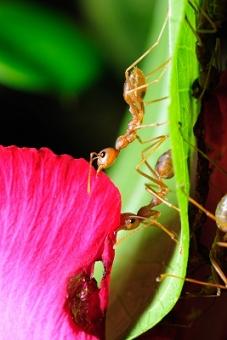 Picture courtesy of "Moomsabuy" at "Freedigitalphotos.net"

The predatory ants you should look out for are

· “Army ants” (They are nomadic and can overwhelm their victims in sheer numbers.) 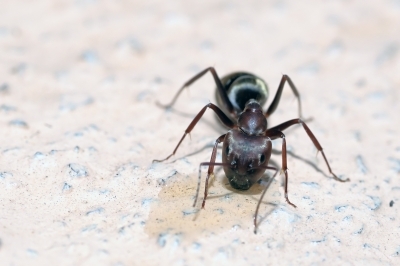 · “Carpenter ants” (They build their nests in wooden environments and feed on many different foods including insects and earthworms.) and

· “Red fire ants” (they feed mostly on plants but prey as well on crickets, earthworms and even small infant birds. Their sting is very painful even for humans)

How do we protect worms from ants?

There are a few ways you can discourage ants from entering or returning to your worm farm. One way to protect worms from ants is to raise the moisture level in the worm farm to levels that the ants won't tolerate anymore.

Another method to keep ants from entering your worm bin is to cover the legs or the base of your bin with a sticky oily cream or gel (for example Vaseline). I found that this will work only temporarily and becomes quite a messy affair.

The best way to protect worms from ants is to deny the insects any access to your worm bin.

Convert your worm farm it into an island surrounded by water.

Don’t worry it sounds more fancy than it actually is. It only takes a few minutes to set it up and it’s to my knowledge a near bulletproof protection for your worm farm against any kind of ants.

What you need to set it up is

· A few liters / gallons of water.

How to set up your worm farm island! 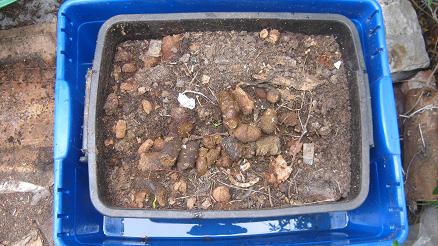 · Place the bricks inside the basin in a way that your worm farm can safely stand on them. 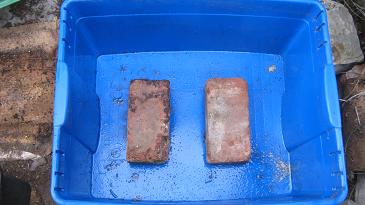 Place 2 bricks inside the container for the worm farm to rest on. 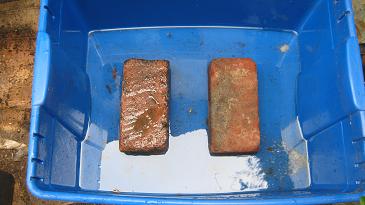 A worm farm island with bricks and water.

Place your worm farm on the bricks and make sure that neither the bricks nor any part of the worm farm touches any of the sidewalls of the basin. 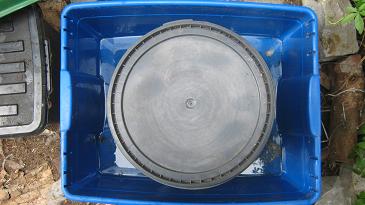 A worm farm protected by water against ants and other invaders.

Now your worms are safe from ants as they cannot swim or cross water. Note the bigger the distance between the worm farm and the outside walls of the basin the safer will this solution be as well against other pests like slugs.

The only way ants could access your worm farm now

would be in the highly unlikely event that an ant queen and a few males would fly onto your worm farm and start a new colony right inside your worm farm.

Important: Make sure that there will always be water in the basin to protect worms from ants and other pests.

Return from "protect worms from ants" to the "Home Page"

Find out more about other inhabitants of a worm farm.

what are Worm farm predators?

Why are worms useful in the garden!

For questions and comments please go to our contact page!

Is that poo in your worm farm photo?!

Is that poo in your worm farm photo?! If so, what kind and is it ok for the worms and resulting worm tea?

Kinds of worms and compost worms

is my worm bedding too wet?

Can a Red Wigglers cross breed with another say European night Crawlers or other Earthworm family? And will a warmer or cooler soil temperature excite …

Ants in a new worm farm

Hi. I just started my worm farm yesterday. Unfortunately the ants got into the farm. Im from southeast asia. My wormfarm is an old drawer which some of …

How to protect worms from ants?! Not rated yet
Hello, I trust you are well. Ants are quite a common problem to deal with when you are running a worm farm, they actually don't cause direct problems for …

Worm soup, No worm tea in my worm farm?! Not rated yet
Hi there wormies of the world, I have had my worm farm for over a year and rarely get any juice. I dont think its a shortage of worm problem and they …

What you can do about ants in a worm bin! Not rated yet
For many people that have a worm farm ants can become a problem rather sooner than later. The fear that ants will feed on worms and might destroy the herd …