Use worms against
climate change

More and more people all over the world take action and use worms against climate change. What at first is sounding like a joke is actually an encouraging fact and

gives us a glimmer of hope in the battle against global warming.

While increased rainstorms have hit some areas of our planet and lead to unprecedented floods, other parts of the world have been hit with severe draughts which resulted in water shortages and destroyed crops.

The ice at the polar caps is melting at an ever increasing speed which not only endangers the polar bears that rely on the ice for their survival but might actually raise the water levels of the oceans to the points where many coastal areas of the earth might get flooded and permanently covered by the seas.

A large mature compost worm can recycle up to half its body weight of organic waste per day.

Although no one can accurately predict all the negative effects that climate change will have, the alarming signs are here and action to reverse or at least stop global warming needs to be taken now.

Use worms against climate change

Global warming occurs due to the massive release of the green house gases, Carbon dioxide (CO2), Methane (CH4), Nitrous Oxide (N2O) and fluorinated gases (F-gases) into the planets atmosphere. These gases trap energy in the atmosphere and cause it warm up.

The sources of greenhouse gas emissions are

Today's decision  makers as well as every single human being should assist to reduce the production of greenhouse gas emissions in each of these fields.

One of the easiest ways to combat global worming is to use worms against climate change. Earthworms and compost worms feed on organic matter that is starting to rot. Our societies specifically in the western world are producing millions of tons of kitchen-, household- and garden waste that gets dumped on landfill sites where it produces carbon dioxide and methane. Especially methane is a very potent greenhouse gas that takes up to 20 years to reach the upper layers of the earth atmosphere. 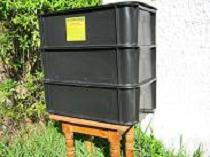 A 3 tier worm farm is great to combat global warming

This practice of dumping organic matter is not only a waste of valuable resources but as well entirely avoidable.

Domesticated earthworms thrive on nearly all organic matter and can recycle huge amounts of wet waste on a continuous basis.

As a matter of fact worms can convert organic waste into worm castings one of the most balanced natural fertilizers and soil conditioners known to man.

This process is called worm farming or vermiculture and humans can implement it to use worms against climate change in large industrial ventures as well as in individual domestic worm farms.

12000 compost worms can recycle more than  one ton of organic waste per year and prevent it in that way from producing methane gas. If each private household would add their kitchen- and garden scraps to a worm bin we could recycle millions of tons of wet waste and use worms to combat climate change.

On our pages you will find all the information you need to start your own worm bin at home, produce your own nutritious organic fertilizer and contribute on the way to a healthier environment.

Be part of a better future and use worms against climate change!

Return from "worms against climate change" to the home page

Use earthworms to make money from home

Find out more about climate change

For more worm compost related information! Type your question or keywords (for example "earthworm" ) into the search box below.

Nice article. Please take care of the typhos though (i.e the spelling mistakes) such as "ad" instead of "add" and "worming" instead of "warming".

ClimateSceptic - There is no global warming!?

Hi, while I am absolutely with you on the matter of worm composting, recycling and organic farming (gardening), I am most annoyed with your statements …