How to start and maintain an
Indoor worm farm

Having an indoor worm farm to compost kitchen scraps sounds for many still a little strange. But more and more environmental conscious house owners and apartment

dwellers are recycling their rich organic waste with the help of compost worms in specially designed worm compost bins.

The beauty of it is that it's quite a clean affair and a healthy worm farm won't produce any bad odors but rather smells like fresh forest soil, or so I've been told! My ability to smell has been seriously compromised years ago when a doctor wanted to stop a nose bleed I was suffering from...! But that's another story! But many of my clients and friends have confirmed with me that there are no bad odors coming from their worm farms. And this makes sense because the worms are feeding exactly on those parts of the kitchen scraps that are just busy starting to decompose.

And those if not removed are responsible for foul smells. 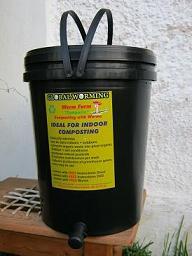 This is a typical indoor worm farm that we produce.

Requirements for an indoor worm farm

Let's have a look at the requirements an indoor worm farm should fulfill! 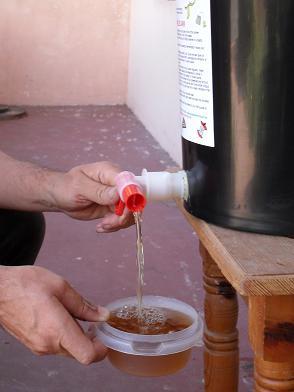 Some worm leachate drained of from a worm bin.

This will prevent the worms from drowning in the unlikely event of to much liquid inside the bin and will as well act against foul smells.

The main advantage of the tap is that you will be able to get hold of the worm leachate which will be an nice organic fertilizer if your worm bin has been in action for a while and accumulated an substantial amount of finished worm castings (worm poop).

The excess liquids in your worm farm will be able to absorb nutrients from the castings which can be fed to plants as a liquid slow release fertilizer.

that worm leachate improved our fruit and vegetables when we applied it on a regular basis. For more on that subject have a look at our worm tea page.

Whenever you have some food scraps you want to add to the worm bin just open the lid, drop it inside and close the lid again.

The worms will feed on the scraps and convert them to worm castings.

When your indoor worm farm is full harvest the worm castings use for your plants and put the worms back into the bin.

On our pages you should find all you need to know about starting a worm farm, harvesting the worm castings and

every other subject around worm composting. If you are living in a small apartment or flat and would like to compost your organic waste, get a worm farm and give it a try.

How to build the Indoor worm farm

Can you please give the instructions on how to make the indoor worm bin from bucket as shown in the picture here https://www.worm-composting-help.com/Indoor-worm-farm.htm …

Ants in my School Bin

Hi there- I have had a worm bin in my classroom for several years, keeping it out of the way under the sink. It's spring and recently students were …

Soldier Fly Maggots Leaving the Worm Bin Indoors Not rated yet
I work as a special ed teaching assistant at a high school in Northern Virginia. Last year we purchased a worm bin and 10,000 red wigglers. Over the summer …