Worm farming in a hot climate

Is worm farming in a hot climate possible at all? This is a question I've been asked many times by people that are keen to recycle their food waste and other organic materials with

the help of composting worms but are living countries which faces extremely hot temperatures on a regular basis.

Although composting worms are quite hardy creatures that can tolerate a wide range of temperatures (5 degrees C / 41 Fahrenheit to 30 degrees Celsius / 86 Fahrenheit) worm farming in a hot climate can become problematic when the temperatures rise to extreme levels. Exposure to temperatures above 30 degrees Celsius / 86 Fahrenheit can be fatal for composting worms. In order to practise worm farming in a hot climate it is essential to provide an environment that will protect the worms from sun and heat. 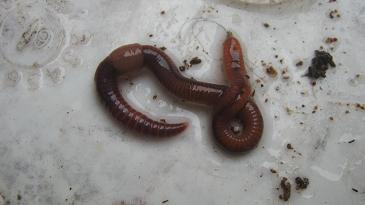 Worm farming in a hot climate

The key to a successful worm farming setup is to place the composting worms in a sheltered, insulated environment that keeps the temperatures in the worm bins at moderate levels. This prevents the common practise of many worm farming enthusiasts to place a worm bin outside in a nice shady spot in the backyard or the garden. The risk of overheating would just be to great. There is however a way that a worm farm can successfully be run even in hot climatic conditions. A worm farm can be placed inside a polystyrene box that will protect the worms inside the box once its lid has been closed. 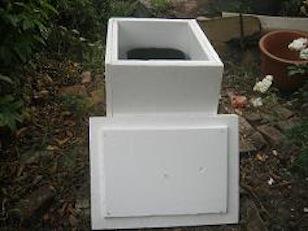 A worm farm inside a protective polystyrene box

I built the box above myself and it works really well. It is of course vital not to place large amounts of organic waste into the worm farm that has not been through the heat stage of the decomposing cycle. During this stage organic material can warm up to 80 degrees Celsius / 176 Fahrenheit which would be lethal for your composting worms. Whenever you feed your worms add only a layer of 5 to 10cm / 2 to 4 inches of fresh worm food on the surface of your worm bin. This will ensure that the contents will not heat up.

Other places that will protect your composting worms from overheating are cellars or buildings with good insulation or air conditioning. Basically any location that can provide a stable moderate temperature all year round should work for a worm farming set up.

Return from "Food waste" to the "Home page"

Worm farming is a sustainable business

View our Fauna and Flora designs available on hundreds of products and shipped right to your door.