Mold in worm farms is not an uncommon sight and happens quite often especially in fairly new worm bins. Worm composting enthusiasts in particular those that are just

starting their first worm farm are often very concerned about the well being of their worm herd. And although I believe that compost worms deserve all the positive attention and care they can receive, they are actually pretty hardy creatures and can handle a lot of environmental factors inside their worm farms that might look dangerous to us humans.

Seeing thick white mold on fruits and vegetables inside a worm bin is something that quite regularly raises concerns in worm farm owners. 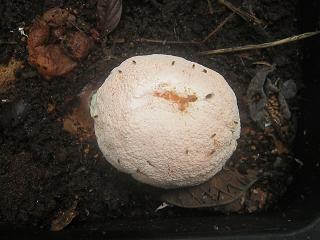 An orange in a worm farm covered with white mold.

But luckily for worms and worm farmers there is actually no need to be alarmed about mold in worm bins at all. It is a fungus that loves a dark and moist environment similar to the mushrooms that we see on lawn and forest floors mostly during the wet autumn months of the year.

The spores of the mold are traveling airborne and will gladly settle on wet rotting organic materials they might find in worm farms. As mentioned before this is no danger or problem for the worms at all.

On the contrary compost worms will relish the additional food  source the mold offers to them. Mold is actually assisting in the break down of organic material and in that way can be seen as beneficial and a contributor to quicker recycling of wet waste.

Effects of mold in worm farms

Nevertheless, mold in worm farms although welcomed by compost worms might cause allergic reactions in people that are living in close proximity of the worm composting system.

To avoid this there are a few ways to either prevent the formation of mold in worm farms or the contact with it once it has been established.

Reduce the quantity of worm food added to the worm bin to enable the worm herd to consume their food before mold can grow on it.

Add additional worms to the worm farm to improve the speed of recycling.

If mold has formed in some areas of the worm farm dig a trench and bury the moldy parts below the surface. The worms will feed on the tasty treats and will convert them into nutrient rich worm castings.

However if you don't suffer from allergies against mold and it's presence inside your worm farm doesn't bother you or your family then you can actually just ignore it.

Your worms will take care of it sooner or later!

What are compost worms?

Find out more about beneficial nematodes

Return from "Mold in worm farms" to the Home page.

Did you know that worm love dog poop?

Find out more about worm food!