The worm business directory Ukrayina is for all those garden- and recycling enthusiasts that want to start to convert their garden- and kitchen scraps into nutrient rich worm castings.

"Fill in the application form at the bottom of this page to apply for inclusion of your business in the directory.

If you want to stop adding organic waste to your dirt bin and help to reduce the production of greenhouse gases on landfill sites than the worm business directory is here to help you find a supplier in your country and hopefully even your local city!

Start recycling with earthworms and help in the fight against climate change. 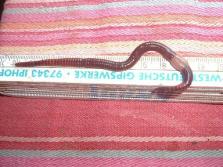 Would you like to start a worm bin or a worm composting business?

If you are keen to start a worm bin or want to generate extra income with a worm composting business but can't find a supplier in your country, have a look at the worm farms of SA WORM FARMS an established worm farming supplier from Cape Town in South Africa that can export its competitively priced worm bins and assist you to get started. Contact them for assistance!

Or get a copy of the book

"How to start a profitable worm business on a shoestring budget"

which will teach you all you need to know to make money recycling food waste and garden waste with earthworms and start your own worm composting business from scratch!

Be your own boss an work from home!

listed in the directory below yet,

and get a basic listing for your business

Melnichenko - Supplier of earthworms an worm castings from the Ukrayina.

How to create an income with earthworms

Return from worm business directory Ukrayina to the "Home Page"

How to brew worm tea